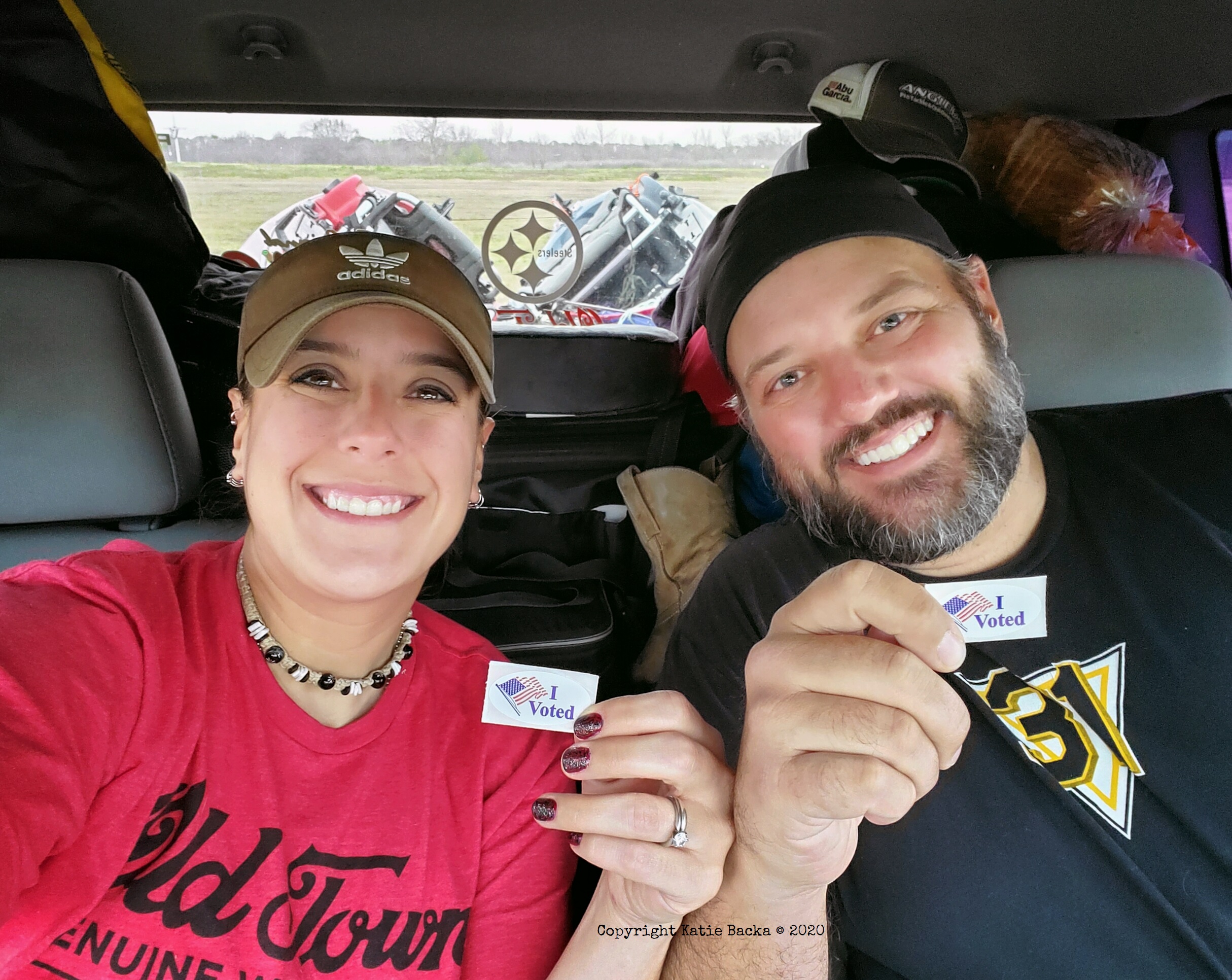 Preparation for “the big show” began months in advance…

Maps were studied, noted, and marked with fine-tooth precision.

Arrangements were made with neighbors for pet care.

Countless articles were read about the tournament waters.

Hours of video were watched about fishing in rough conditions.

Fishing tackle was finely tuned and organized – then reorganized again.

Rods and reels were cleaned, adjusted, oiled, and greased.

Hundreds of yards of new line were spooled.

Launch points were carefully decided on.

Batteries were changed in safety lighting.

The truck was loaded and fueled up.

We arrived the night before registration day and got settled in with our team.

Alarms were set, snack bags were packed, and before we knew it – it was game time… 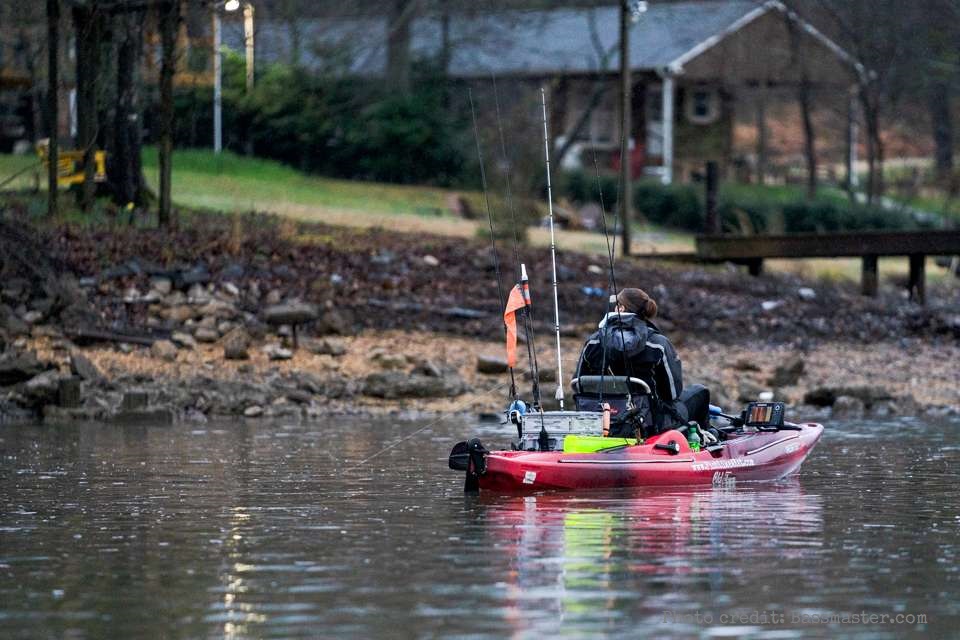 We hit the ramp early, and I took off on the water like a shot – just shy of a mile later, I find an area I want to start in, get myself setup, and then realize that our identifiers are sitting neatly on the dashboard of our truck…

I pedal back to the ramp as fast as my PDL could carry me, alerting Ryan as I flew by, and after we reach the ramp [lungs still burning and heartbeat pounding in my ears from the unexpected, early-morning cardio] Ryan heads to the truck to grab the forgotten tags.

“Lines in” has already begun, and with so many anglers working ahead of us – I decide to take it easy heading back out. I steadily work my way down an empty shoreline, constantly scanning my surroundings for activity, features, and other clues to help dial into the bite.

Then my rig literally SLAMS to a halt…

I back up slowly, and realize that I’ve struck a log floating just under the waterline – and that my kayak suddenly feels funny…

I lift the pedal drive up from the water to discover a snapped prop – my first ever, in fact.

“No worries” I think to myself; “you came prepared with spare parts – just find an open shoreline, change it out, and get back on the water”.

I pulled up onto a wide sandbar along the main lake, change out the prop, and off I went. 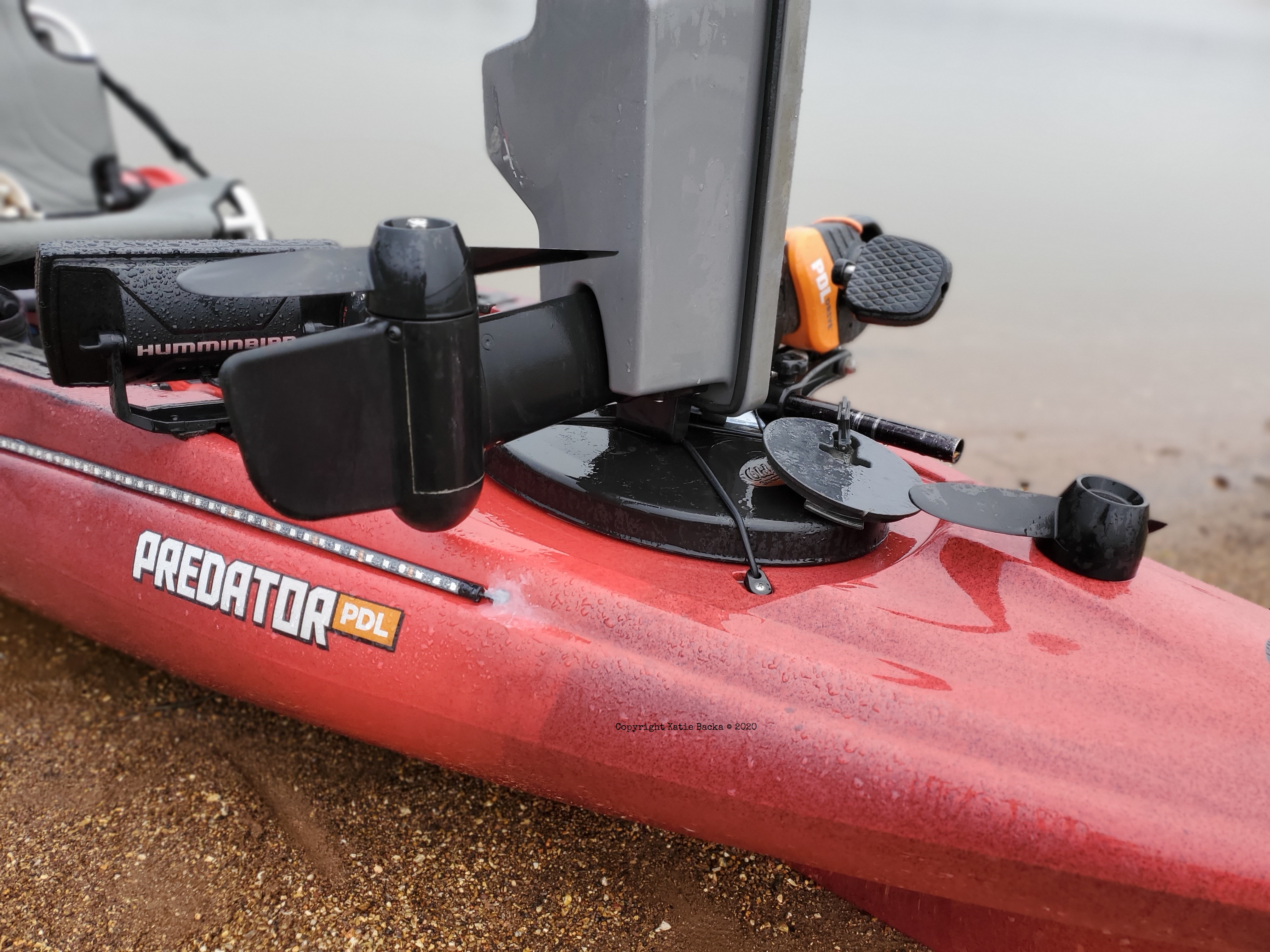 The weather was expected to be rainy for most of the trip, but as I was slinging around a few docks, thunder began to roll in the distance. I pull out my phone to check the radar – only to find an intimidating storm system heading our way. As the storm moves in, the thunder gets increasingly louder, and suddenly a rush of anglers appear to be heading in the direction of the boat ramp.

I check the radar again, look at the sky, scan my surroundings, and notice a tall, empty boathouse near a pocket of the creek arm I’m fishing.

I decide to stay on the water.

After the rain began to pick up, I backed my rig up into the narrow opening of the boathouse, which was unusually shallow due to the lake being at winter pool, putting the deck of the dock well above my head. At this point, I haven’t caught anything – so I decide to take the advice of one of my idols and open a protein bar. 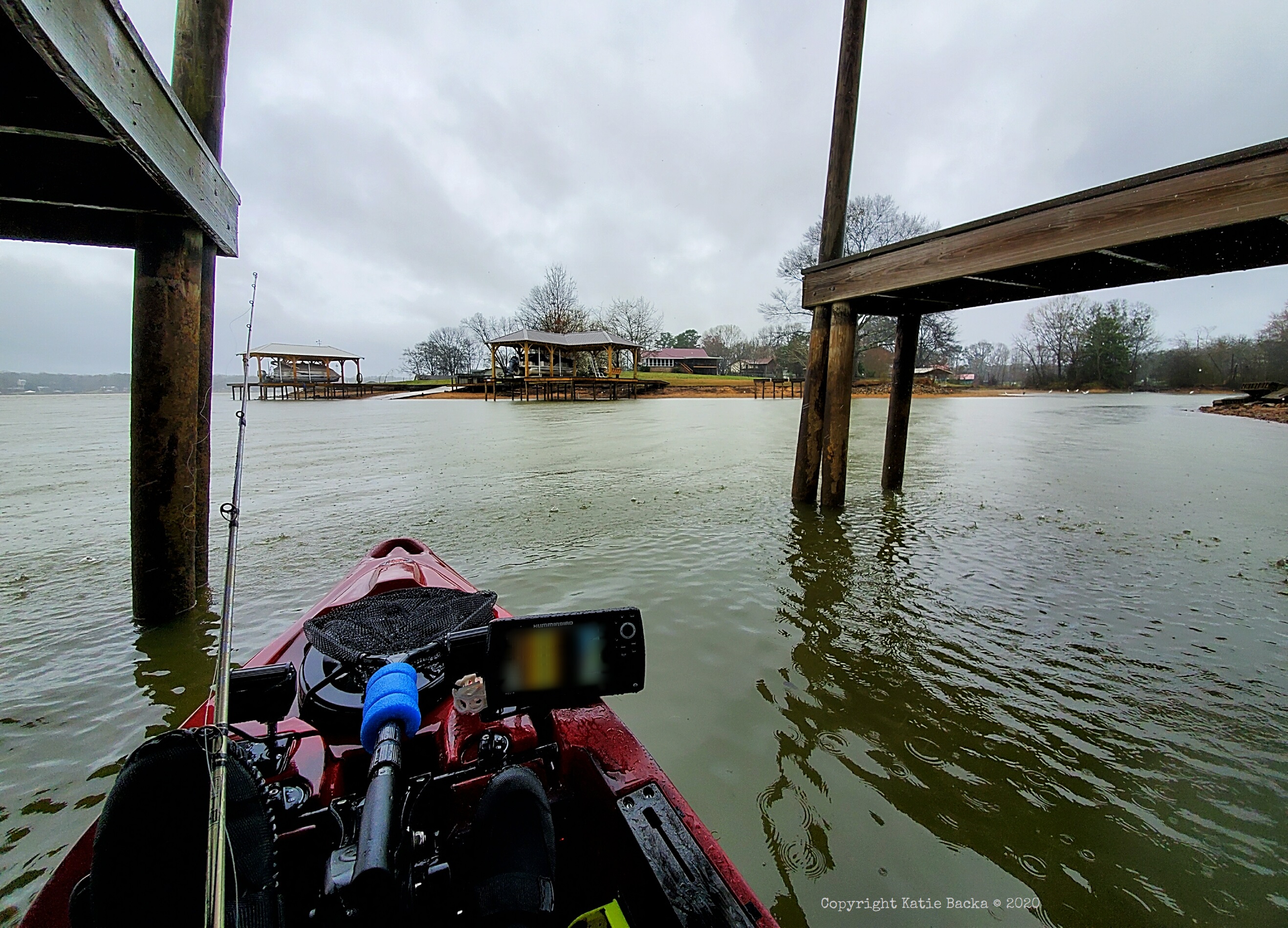 As I’m snacking, I’m thinking about my choice of water, hoping not to get struck by lightning, and wondering if I made the right decision about where to launch; but then I remind myself that I did the work and I know what I’m doing – and I can’t help but hear one of G-Man’s (Gerald Swindle) motivational talks in my head. In one of his “positive mental attitude” sessions, he talks about one of the biggest reasons why KVD catches so many fish [besides his raw talent], which is simply, he BELIEVES that there’s fish wherever he is, and KNOWS that he’s going to catch them…

So as I’m watching the water, I realize that the roof of the boathouse is high enough above me to throw one of my shorter rods without an issue – I change out my lure out to something that would stand out in the storm, and started casting away. About 5 minutes later, at 0857 – I lay into a nice 15.25” bass – and immediately, I knew I wasn’t leaving this spot – come hell or high water… 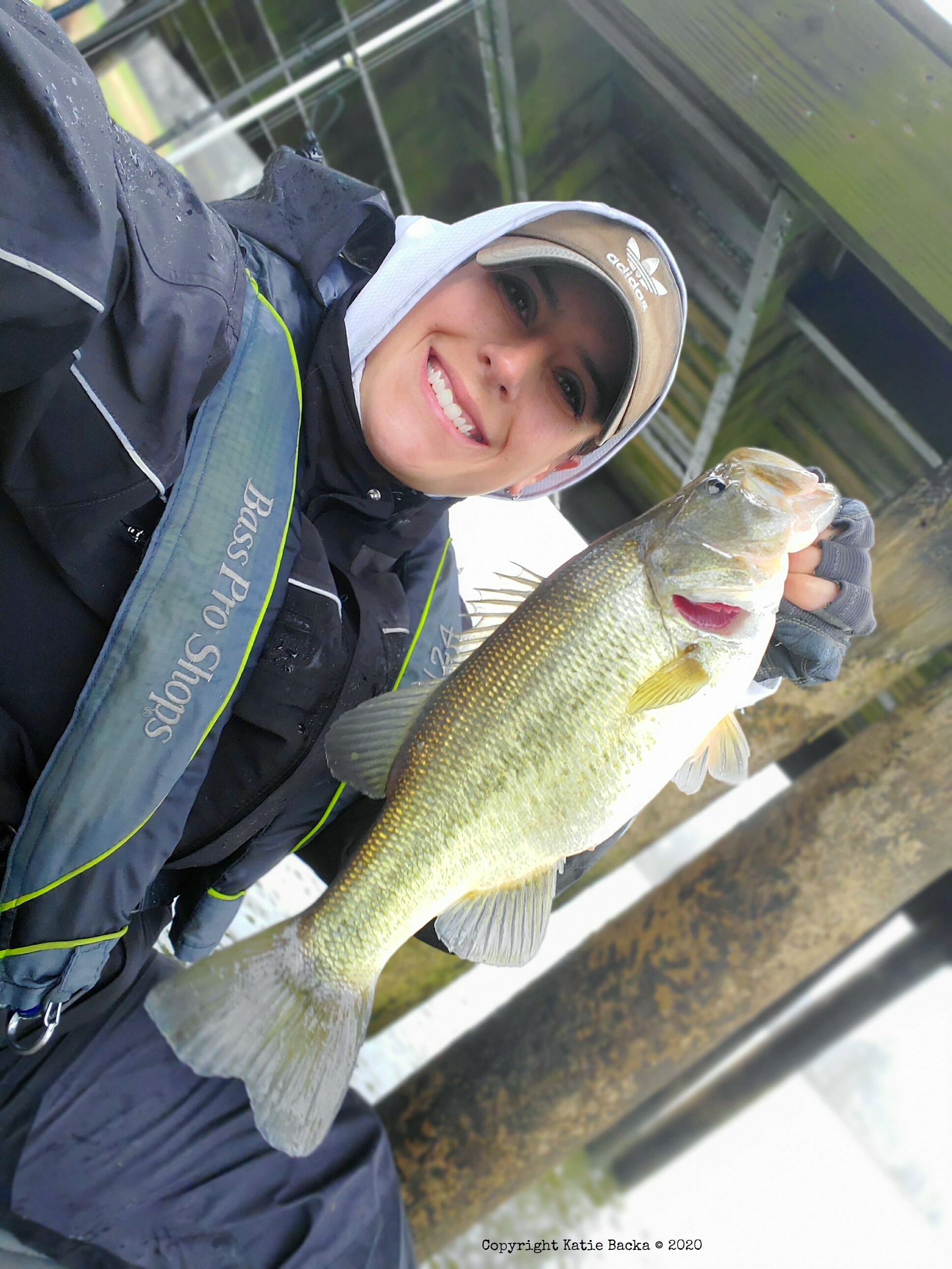 By noon, my phone is exploding with positive encouragement from ladies all over the country watching the live leaderboard, screenshotting, and tagging me in posts across social media…

More storms roll into the area, and back under my boat house I went.

Then somewhere around 1400, Ryan pedals up with an enormous smile on his face; “Babe…I’ve got big bass…”.

I smiled and chuckled, but then looked at his face, and realized he wasn’t kidding. “Seriously?!?” I asked. 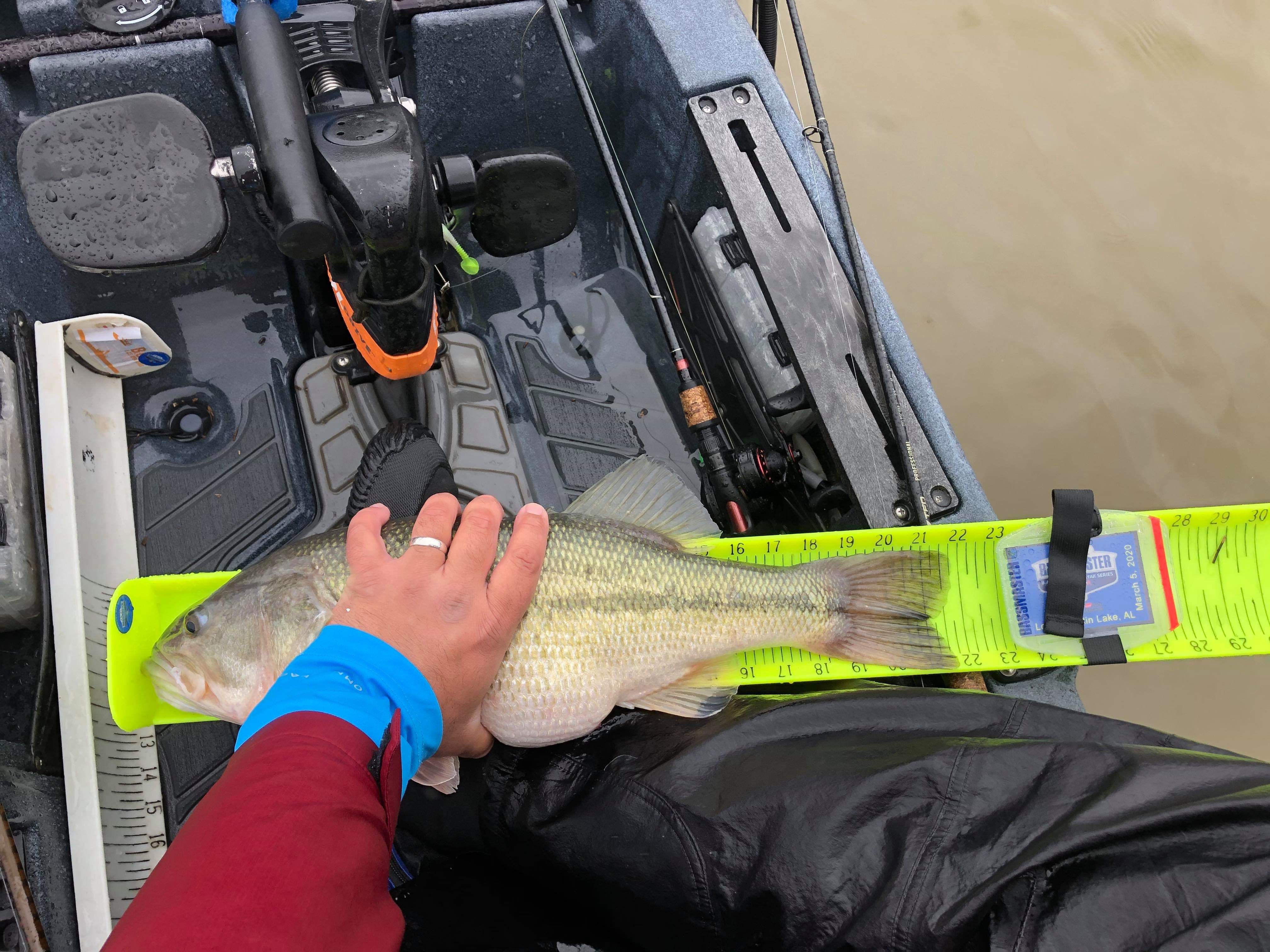 At this point, I haven’t looked at the leaderboard or added up my total inches, but we both realized that we absolutely had a dog in the fight…and got back to fishing as hard as we possibly could…

I pedaled back to meet Ryan at the ramp, and when we got there, there was quite a few people loading up or waiting to do so, but because they were all individual competitors and there’s two of us, we let them go ahead of us. Once we were able to, we both pulled up onto the ramp, and Ryan went to get the truck while I helped a gentleman with a heavy rig get his boat loaded up. Normally, we’d cart our kayaks up into the parking lot to unload them into the truck, but over the past two weeks, our kayak carts had systematically broken into pieces.

Not wanting to take up the center of the entire ramp, Ryan waited to back down one side, and after we loaded up, I noticed an expensive lock laying on the dock that I assumed belonged to one of the competitors, so I carried it with me to return it to its owner at the weigh-in (who I actually did find!).

We hopped into the truck, and double checked the times on our handout for our submitted fish – “Lines out: 3:00pm Photo submissions due by: 3:30pm Check in times: 4:30pm Awards: 5:00pm” – and then made triple sure that all of our pictures had been sent accordingly.

As we headed to the weigh-in, we were bouncing around like little kids – both beyond excited that we did very well on a very tough day of fishing…and last Ryan had checked, he was still in the lead for “big bass”, and I was holding strong, well within the top half of the field.

It took a while once we arrived, but eventually we found a place to park that didn’t block any of the fire department garage doors or exits, and we headed in.

We were informed that we missed the check in.

Initially, I couldn’t wrap my brain around what that meant…

“Be back here at 4:30” was all that kept running through my head.

But after we were told where we would have finished, all I could utter was “I think I’m going to be sick”.

To quote Tyler Durden from the movie “Fight Club” - “We have just lost cabin pressure”; and to put it bluntly, something inside of me broke, and the ability to speak escaped me for the next few hours…

But what I do know is?

230 anglers from all over hit the water that day.

Of that, the top 44 anglers would win their spot to the national championship.

And Ryan did in fact catch the biggest bass of the entire tournament – by almost 2 inches – which was worth $500.00 all by itself.

“Soul-crushing” doesn’t begin to describe what we felt.

But anyone who knows us well, knows that we handled ourselves respectfully.

We didn’t storm out.

We didn’t touch our phones.

We quietly stood in the back of the room while the top of the field was called out – and we applauded every one of them – because despite our heartbreak – they deserved it.

Later that night, our friends and teammates did their best to make us smile, and reminded us that no matter what, we crushed it that day, and that we will do it again.

But why tell the story?

Why not keep it quiet??

Because we don’t want this to happen to ANYONE ELSE.

We want people to learn from it.

Our sport is growing very quickly, and as it gains speed, we want people to celebrate their wins – not watch them slip away – so here’s what we’ll be doing moving forward:

Because we’re both lucky enough to have been diagnosed with ADHD, our attention span is relative to that of a hamster, so we’ll be setting even more alarms on our phones to keep us well ahead of schedule – and possibly having friends and/or family text or call us at set intervals.

A very large checklist will be created for tournament days – each one taped to dashboard on the day of the event – which will include things like, “DO YOU HAVE YOUR IDENTIFIERS??”

A question sheet will be brought to captain’s meetings to ask about anything ambiguous – including if there’s a cutoff time (something we weren’t accustomed to) for checking in, and if anything of the like could result in a disqualification.

What won’t we be doing??

We won’t stop helping people who need it while we’re on the water.

We won’t stop being courteous to others at the ramp.

We won’t endanger others by speeding or driving recklessly to a meeting.

We won’t be badmouthing anyone or any organizations.

We won’t be wasting time feeling sorry for ourselves.

We won’t ever give up.

Because despite everything that’s happened, this isn’t an ending…

It’s just the beginning of an epic fishing story.

PS. This happened the very next day!!! 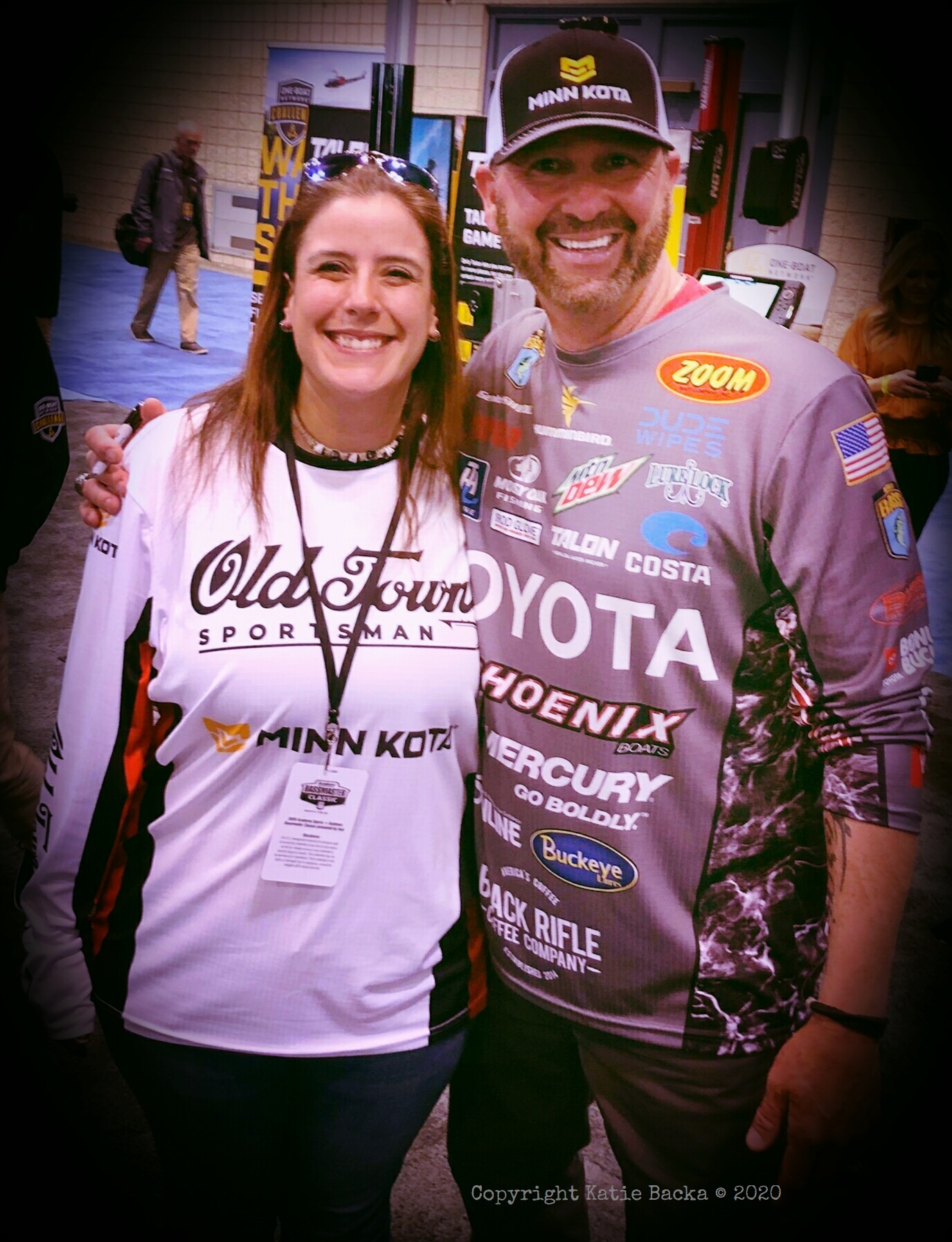 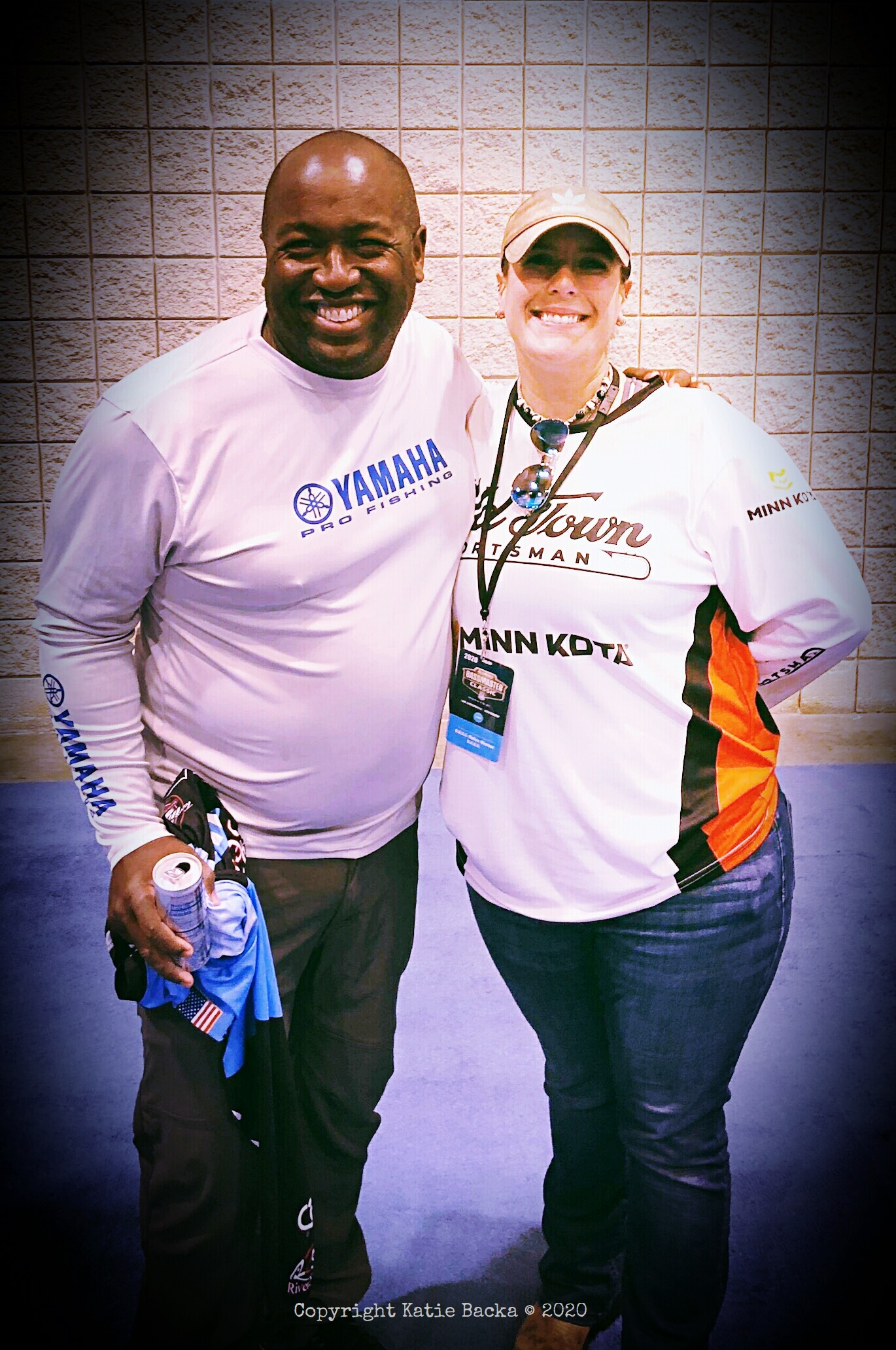 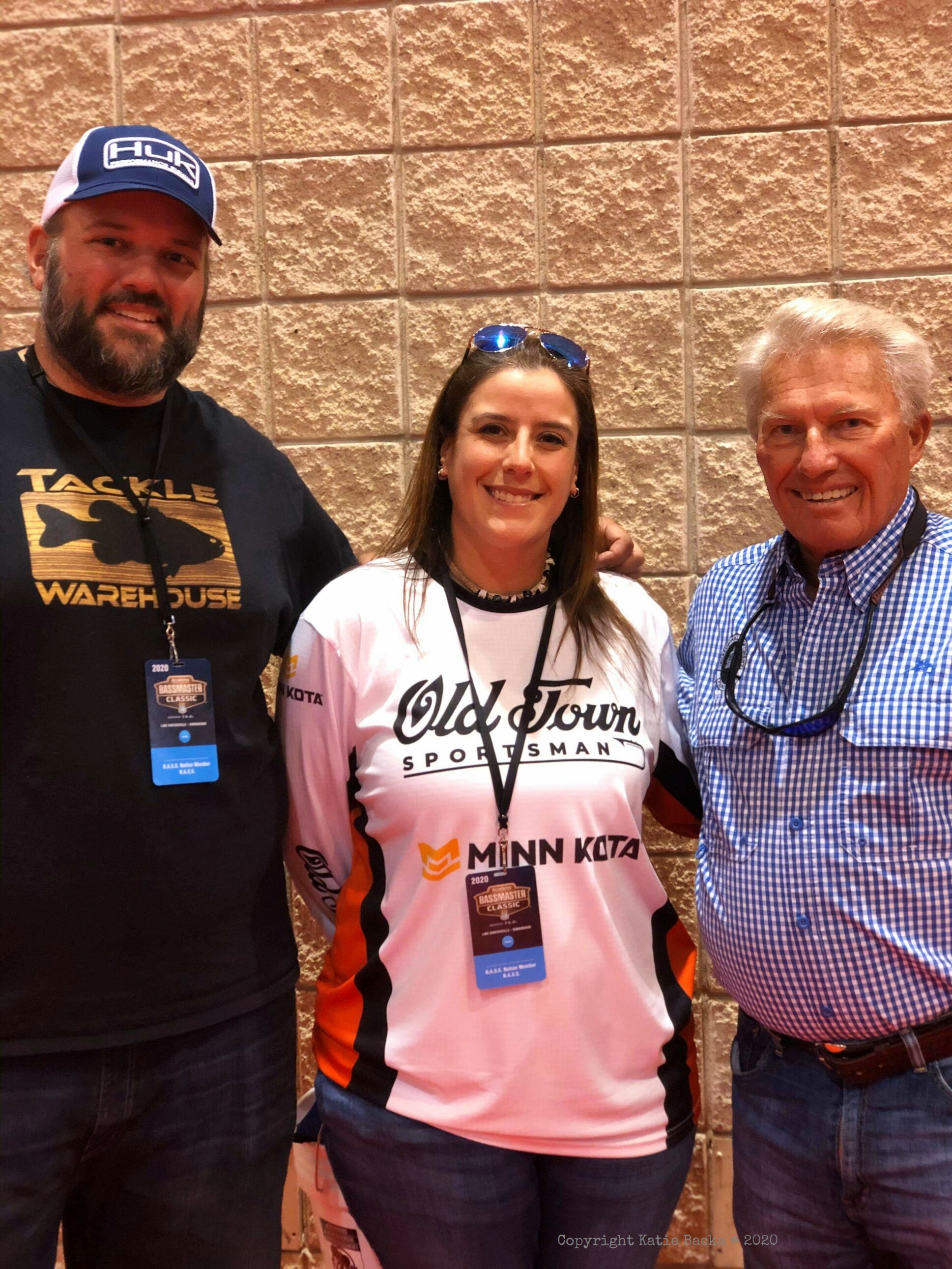 And of course, the legendary, Roland Martin... 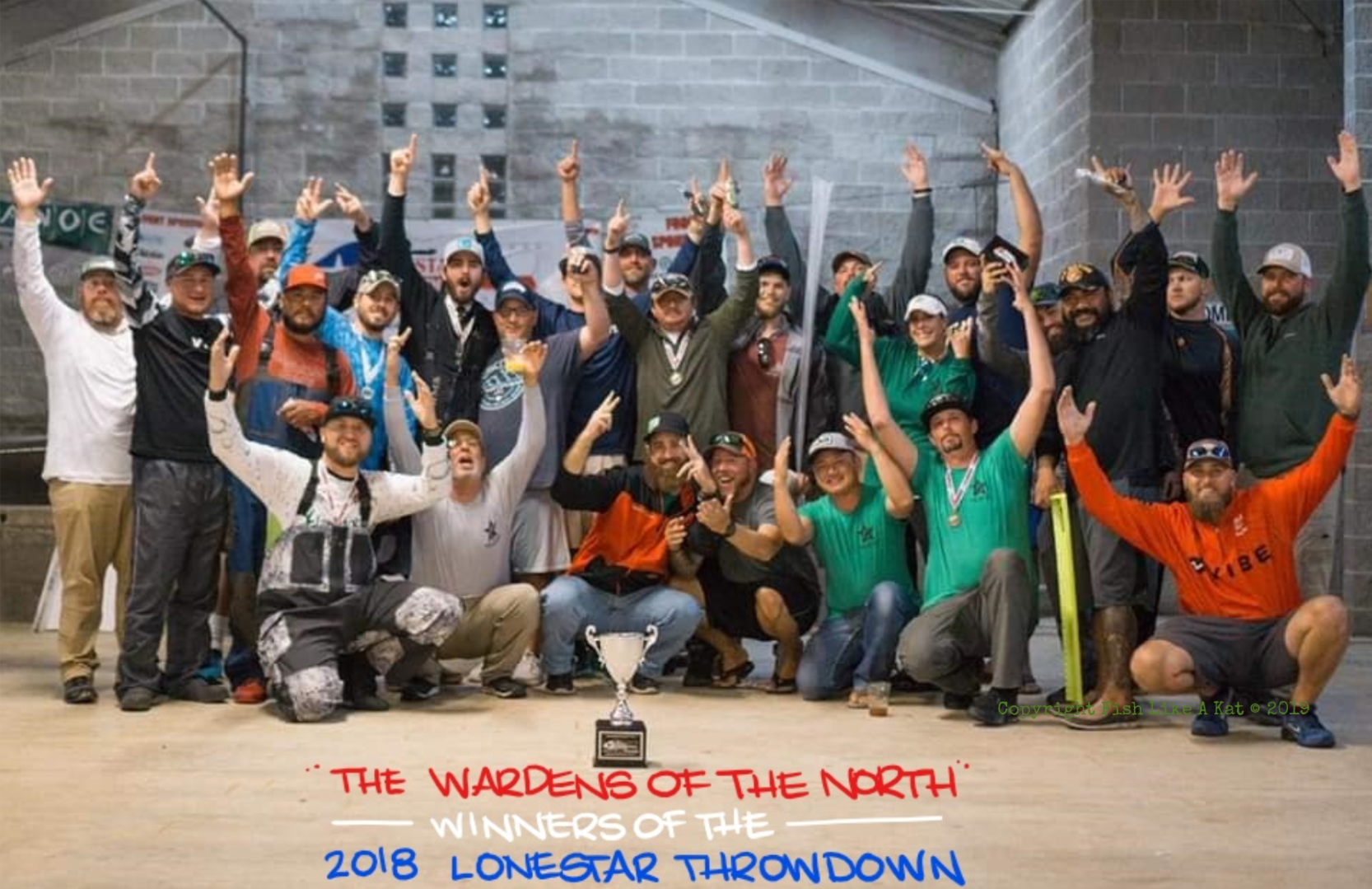 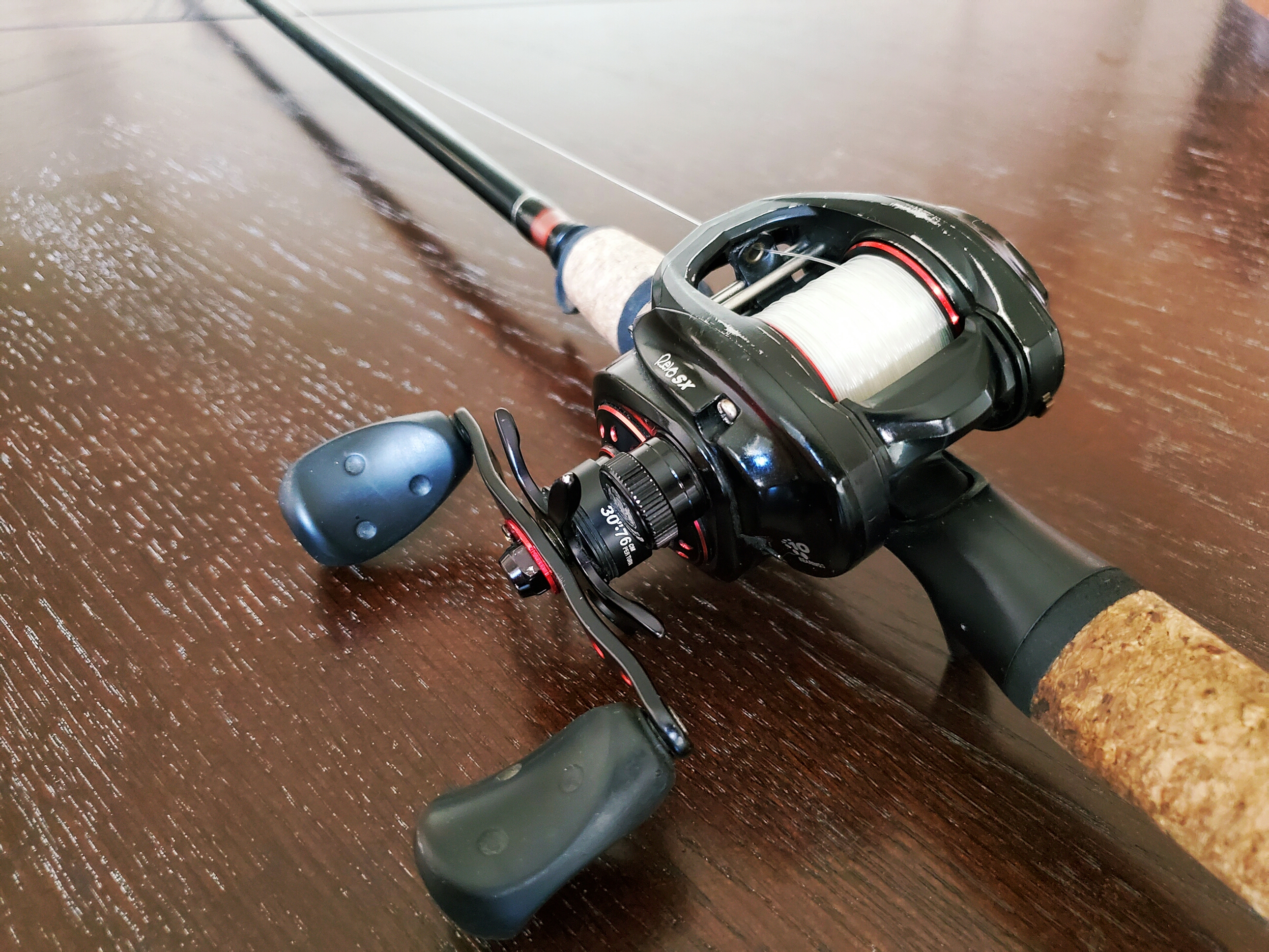 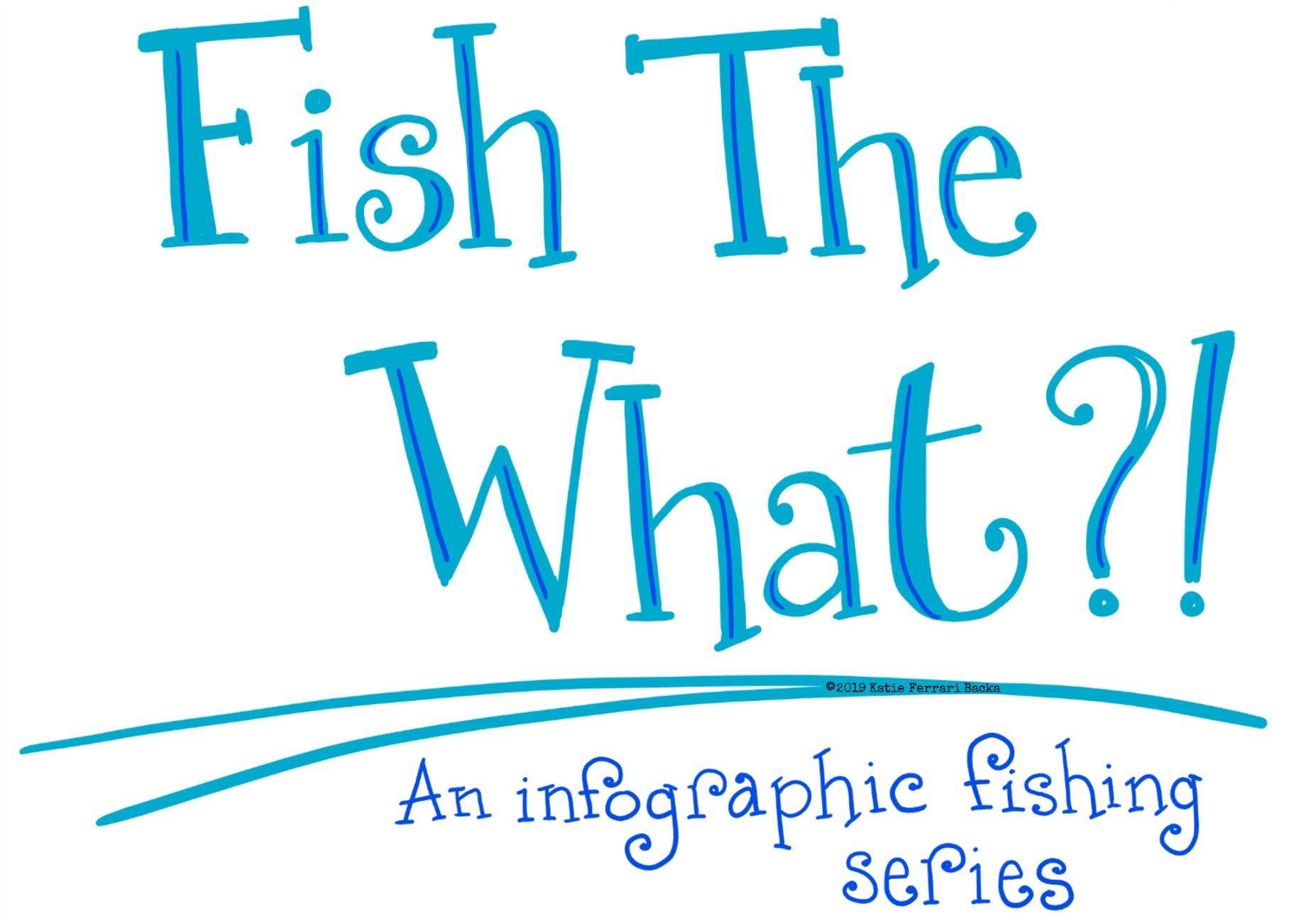 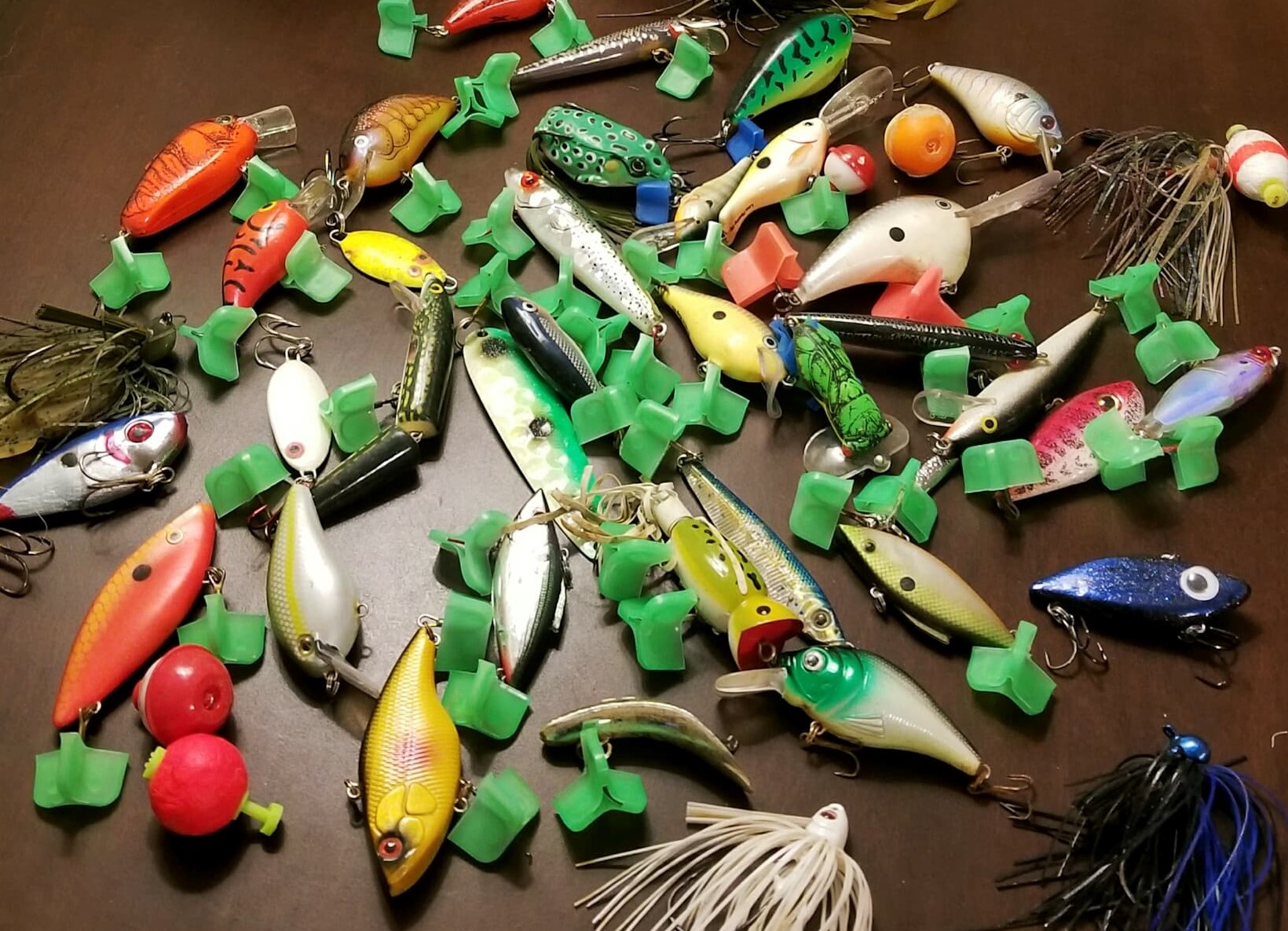